It was a great privilege and pleasure to work as producer for Holonyne Corporation’s brand new video installation at LAX in tribute to Mayor Tom Bradley. The video was designed by Jon9 for JCDecaux and LAWA (Los Angeles World Airports) for the 72′ video display Time Tower in the departures lounge at the Tom Bradley International Terminal. An unveiling of the video to the public was held on January 30, 2017. It was an interesting time to do so, as the airport was besieged with protests surrounding the controversial travel ban – but we held the event regardless and managed to bring some positive energy to the week honoring a wise and dignified man who helped usher in a progressive era in Los Angeles.

This marks the centennial year for Tom Bradley, who served a whopping 5 terms as Los Angeles mayor from 1973-1993! Through the process of producing this video I discovered so much about this monumental figure who greatly influenced modern Los Angeles. Before working on the video, I knew little about him, other than the fact that –  interestingly –  we shared birthdays (Dec 29)!

Tom Bradley worked his way up the ranks in the LAPD, dealing with its troubled history of abuse and racism. From there he became one of the first African American city council members,  and eventually ran for mayor. He lost his first attempt, but tried again, this time building a diverse coalition of voters – who rallied behind him. In 1973 he became the first black mayor of a large metropolitan city and worked hard to create a very inclusive city government, one that truly represented the population. He led efforts to build the Metro system, revitalize the downtown area, and hosted the first financially successful Olympic games in 1984 (thereby creating a model for future city’s to learn from) all while being a great family man. These elements (and more) were worked into the beautiful tribute piece created by Jon9 involving a series of B&W photographs over colorful city backgrounds.

I hope that during this centennial year many people across the city and nation will learn more about Tom Bradley’s life, challenges, and accomplishments. 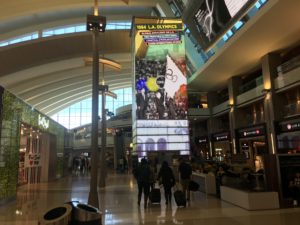