An exhibition that explores living in Los Angeles from a lens of the cultural influences behind the artists’ own personal transitions from their place of origin and the historic relationship to the concepts of manifest destiny, immigration issues, indigenous rights, cultural appropriation, globalization, consumer culture, and homogenization.

The centerpiece of the exhibition builds upon Vojislav Radovanovic’s recent installation “Waiting for the Wind” – a chain link fence that encloses a drooping white flag, featuring a painting of weeds and a pile of artificially fertilized commercial soil with authentic Native American arrowheads found in a farm field from Jason’s rural home of Iowa. The piece directly confronts in a poetic manner both the current immigration crisis and of the genocide of indigenous people by the early Americans and history of displacement. The flag is an item used by countries to claim territory, and yet it is caged. It is covered by weeds, which are plants that are seen as unwanted and undesired, but that are boundless survivors that often contain medicinal/beneficial properties. The title evokes the hope that if the winds should change, the flag could yet fly up and beyond the border. 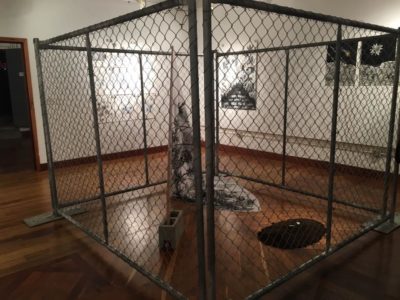 For more images from “Waiting for the Wind” and other artworks from “PRAYER FOR TRAVELERS: Diary of an Immigrant” please visit:
https://vojislavrad.wixsite.com/vojislavradovanovic/prayer-for-travelers-1

Another installation “Corn Utopia Dystopia” by Jason Jenn would reference the greek symbol horn of plenty used as a symbol of abundance and nourishment common in American scenes of Thanksgiving, but wrestle with the modern world’s genetic modification of the corn plant and the devastating effects its overuse has on the ecosystem and human health, an issue that hits close to home in his own family farm background in Iowa.  A “field” of natural multicolored “Indian Corn” morphs into brightly neon colored, glowing, irradiated, and  mutated cobs in a juxtaposition that heightens the tension. A giant horn of plenty overflows with the natural elements being overrun by  unhealthy commercial products that have been artistically adjusted to emphasize their devastating effects on people and the environment and emphasize their overuse.

The walls will also include a variety of paintings, drawings, collage works, assemblages, and photography that explore how the two interpret the exhibition’s themes.

Both artists can do performance art pieces in the gallery utilizing the installation as their set – and even create workshops that involve and/or train the student body of El Camino in creating their own performance works. Jason recently performed a piece “TWINKLE: Traveler Beneath the Stars”, which takes audiences on a very human journey, relating the housing crisis in Los Angeles to the current political climate surrounding immigration and fact that all humans are refugees since Adam and Eve were exiled from Eden. Using stars as the central theme, Jason linked the celestial objects to the cultural obsession with celebrity, weaving a story that reminded people that they possessed the ability to be their own gods and saviors, and exposing the hypocrisy in which religion, nationalism, and capitalism were used as excuses for various atrocities and crimes against humanity throughout history. 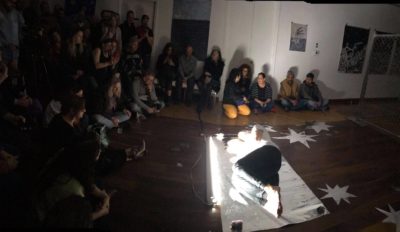 Both Vojislav and Jason will have multichannel video art installations in the smaller gallery spaces.

Vojislav Radovanovic made a cross country expedition waving the weed painted flag across various American landscapes and is working on developing a narrative text.

Jason will complete a new and expanded version of his recent video art installation “Sermon at the Cathedral of the Freeways” a piece that playfully reimagines the massive megalithic structures of Los Angeles freeway interchanges, in particular by the intersection of the 110 and 105 (which also inspired the opening dance number of “LA LA Land”) and the traffic situation which LA is known for into spiritual experience. The grand columns and swooping ramps become a psychedelic gothic cathedral, that honors the busy bustling metropolis and massive population growth it represents and Jason himself becomes a painted concrete deity – or a kind of patron saint for commuter traffic.

Here is a video sample of Jason’s recent work, including “Sermon…”: