Jason Jenn is an interdisciplinary multimedia artist, creating works as performer, writer, visual artist, director, producer, designer, and video editor.  His works are created for exhibition on stage, on screen, in galleries, and at site-specific locations.

His work is about striving for balance, aiming to conceptually engage the mind and perhaps tickle the heart, often mixing humor with tragedy, and are frequently infused with sociopolitical and/or queer empowered themes. He often reexamines familiar archetypes and themes of universal interest with a fresh, unusual perspective. His visuals can take on a dream-like quality that evokes fantastical events and/or suggest strange narratives, pulling viewers in for an unexpected journey. 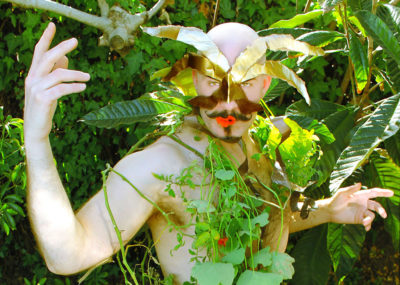 Under the alias Troubadour Trixter, Jason delivers provocative ideas in the tradition of the Trickster archetype. A current and ongoing performance-based projects is creating dramatic interpretations of queer poetry.  These performances become collaborations with the deceased authors and a way to bring greater awareness and appreciation to important, but underrepresented works of literature. The aim is to enhance the literary experience, making the words come to vivid life on stage, accessible to contemporary audiences in fresh, relevant ways.

In 2011 he presented the poetry of Constantine P. Cavafy in a way that told the Greek writer’s emotional life story in a full-length production called Cavafy’s Caress. In 2012 he inhabited French author and filmmaker Jean Cocteau. In 2013, 2014, and 2020 Jason frolics with the whimsical words of James Broughton in a full-length show Ecstasy For Everyone! (the title comes from one of the poet’s personal mottos “I believe in ecstasy for everyone!”). Jason toured elements of the show at several locations (New York, San Francisco, Palm Springs) alongside screenings of the documentary film “Big Joy: The Adventures of James Broughton”. For the 30th Anniversary of West Hollywood in 2015, Jason collaborated with dancers and live music to present some of Paul Monette’s heartbreaking poetry about his lover’s death during the height of the AIDS crisis. 2016 manifested performances about Harold Norse, respected Beat generation poet and mentor to Charles Bukowski, for a series of Centennial Celebrations sponsored by the SF Beat Museum. In 2019 Jason researched and selected love poems from a wide pantheon of LGBTQ poets from history (from Sappho to Mary Oliver, Walt Whitman to James Baldwin) to create LET LOVE FLOURISH during World Pride’s “Love is Love” theme.

Jason was born and raised in rural Iowa surrounded by farm fields, forests, rivers, and gentle rolling hills – a great influence on his body of work which strives to delve deeper into natural and environmental concerns. He received a BA double majoring in Film & Media Production and Theatre Arts from the University of Iowa. He moved to Los Angeles in 1998 and spent several years working for the art departments of Hollywood film and television industry. He created his own independent consulting and creative arts company ReEvolutionary Productions in late 2000. In 2017 he joined forces with another visual artist with a video/media background, Vojislav Radovanovic to create an international multimedia collective Flourish Projects Group, as well as found L.A. Art Documents, providing quality video and photographic documentation to preserve and promote the contemporary arts community in Los Angeles and Beyond.

When I create, I aim to construct worlds that work on multiple levels of interest. I want people to spend time involved in the art, reflecting on how the messages can inform life in valuable ways.  I understand the contemporary art world usually wants to identify artists within one well-defined medium and to keep spirituality out of the work, but my interests are broad and I seek to expand my understanding of life through my engagement with the arts. I am always learning something from both the process and the presentation, the journey and the destination.

Jason studied and performed for 7 years under the guidance of Rachel Rosenthal, Los Angeles Cultural Treasure and Theatre Maverick. He honed his skills and co-created works for 5 years with the underground performance troupe The Invisible Theater. For four years he co-produced a plethora of crowd-pleasing events and performances at Spirit Studio, a community center and cabaret in Silver Lake. Since 2012 he has produced works for the City of West Hollywood’s One City One Pride LGBTQ Arts Festival, including three years as director/producer of the popular Stuart Timmons’ City of West Hollywood LGBTQ History Tour. Jason produced three one-man shows written by and starring Robert Patrick Playwright (“Kennedy’s Children”, “The Haunted Host”).  Additionally, Jason was the first Production Manager of gallery and stage productions for the Los Angeles LGBT Center’s Lily Tomlin & Jane Wagner Cultural Arts Department. He documents the LA underground performance art scene when not performing in them at numerous venues across town. From 2014-2019 Jason worked as the Operations Director for a multimedia video post production and videowall consultation company called Holonyne Corporation (also known as PennRose Studios & Virtularium Videowall Gallery) – that oversaw the programming of the massive videowall structures at the Tom Bradley International Terminal at LAX.  He works part-time as Outreach Specialist for the Torrance Art Museum.

He enjoys organic gardening. Bees hold a particular sway on his artistic mythology.  He actually likes saying  “the ReBegin is here” and wishing everyone “Blissings” with great sincerity and a subtle wink of not taking one’s self too seriously.

[/su_column]
the ReBegin is here